February 26, 2021: Natalie Hopkinson and Sheryll Cashin in conversation explore racial justice, segregation, and the resilience of Black culture within our shared, ever-evolving democracy – in the context of our city, Washington, DC. Moderated by PRRAC Deputy Director Megan Haberle.

This hour-long conversation probes the topic of DC’s changing racial and economic demographics, the influence of Go-Go music, and touches upon what both segregation and gentrification have meant for DC’s residents, in the arts, schools, neighborhoods, and halls of local and federal power.

Additionally, we are honored to present Dr. Hopkinson with the PRRAC Voice for Racial Equity Award to mark our 30th anniversary.

Natalie Hopkinson, Associate Professor of Communication, Culture and Media Studies at Howard University, co-founder of Don’t Mute DC, and author of Go-Go Live and other works.

September 19, 2019: PRRAC and NCSD hosted a powerful conversation, The Lines Between Us: At School and at Home. We discussed what divides Americans and what can bring them together. Who gets to live where? Who goes to school with whom? Will our government push us apart or pull us together?

Segregation continues to divide American neighborhoods and public schools. School desegregation plans have been dismantled, and the U.S. Department of Housing and Urban Development recently moved to weaken the disparate impact standard, one of the most powerful legal tools available to counter residential segregation and other forms of discrimination.

October 16-17, 2018: The Poverty & Race Research Action Council (PRRAC), MobilityWorks, and the Council of Large Public Housing Authorities (CLPHA) hosted the 7th National Housing Mobility Conference.  People from across the country, including public housing authority officials, researchers, and nonprofit leaders gathered to better understand how to further housing mobility and find new ways to collaborate on mobility efforts. The conference specifically recognized the pivotal moment in which we live; the housing mobility “movement” is growing and wielding greater influence: Some recent successes and notable occurrences, include bipartisan congressional support for the housing mobility demonstration bill, the growth of the MobilityWorks technical assistance group, and the release of the Opportunity Atlas from Raj Chetty and colleagues, further demonstrating the economic mobility potential of housing mobility…See More

April 26, 2018: PRRAC presented Reproductive Justice and the Politics of Resistance: An Evening with Loretta Ross and Rickie Solinger…Photo Gallery 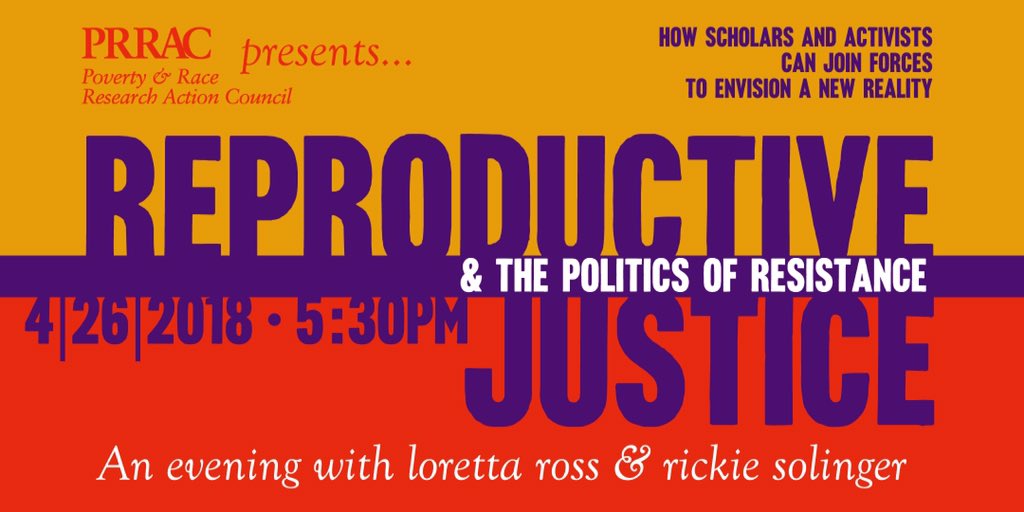 The Poverty & Race Research Action Council (PRRAC) is a civil rights law and policy organization based in Washington, D.C. Our mission is to promote research-based advocacy strategies to address structural inequality and disrupt the systems that disadvantage low-income people of color. PRRAC was founded in 1989, through an initiative of major civil rights, civil liberties, and anti-poverty groups seeking to connect advocates with social scientists working at the intersection of race and poverty…Read More